Sometimes we wonder why we do things differently as opposed to the majority of the cyclists that we meet. We carry a lot of gear and we ride the trails in the opposite direction. So, we start the Mountains-to-Sea cycle trail from the sea side into the mountains, following the Whanganui river upstream. A small sealed road though but going up to Pipiriki and further to Raetihi. We meet cyclists going the other way, bikepackers on a mtb riding the Tour Aotearoa from Cape Reinga (north of north island) to Bluff (south of south island), a 3000 km brevet length-of-New-Zealand event. They call us normal tourists ;-). Btw, the fastest guy made this trip in 9 days and 23 hours…

Riding to Raetihi and Ohakune, Mt Ruapehu appears to us and with that Tongariro National Park. We of course cannot miss out on doing this famous 1-day hike, the Tongariro Crossing, because it is really amazing despite the many other people present on the track. We meet up with Dave & Kris (and their neighbours) again as by coincidence they are hiking the trail the same day. Although the climb to the top is mostly in the clouds, the sky opens up right there to see the Red Crater and the Emerald Lakes making for superb viewing. The walk itself is about 20 km, not something our legs are used to now with all the cycling. The next day we are quite sore and stick to minimal activity. Also because there will be some heavy duty days ahead. The plan is to continue with off road trail riding (see mountainstosea.co.nz), not being all too sure what the trails will be like, and with not too many facilities on the way. We take the Ohakune Old Coach Road (former truck line in 1900’s) and connect this trail to the Mangapurua Track. Changing from virgin native forest to gravel roads to sealed road we end up at the beginning of the Mangapurua track, a wide off road track climbing up to the Trig from where the Kaiwhakauka Track starts to Whakahoro. And it is this part that we worry about most whether it is wide enough and doable with loaded pushbikes. Unfortunately we were misinformed in Ohakune. At some point on the track, this becomes very obvious as the trail narrows down into a crumb trail through native bush, sometimes muddy and sometimes steep. We have to continue, because there is absolutely nothing in this area. The only way forward is to take this trail.  Talking about fun…Anneke (who is becoming very tired now) scares Ivar by making a full layout. Fortunately only bruises and scratches, and no harm to the bike. But we realize we have to keep on going as the sun is starting to set. The last 10 km that day (out of 90 km) takes us 2.5 hours and we arrive just before dark at the lodge in Whakahoro with 1 (expensive) room left. No doubt, we take it. Being both very tired we realize that we have to continue the next day. We ride on the next morning ready for a hell of a climb out of the valley when we get offered a ride from the kayak rental guy, he says the bikes can go in the kayak trailer. We gladly accept. In Taumaranui we get ourselves well informed on the next trail that we want to ride as not to run into the same situation again.

The Timber Trail starts 25 km from Taumaranui and we take a backroad to there (gravel…). Again, people ride this trail the other way around, and without gear. But, the trail is wide enough everywhere and mostly gradual climbing so tough but certainly doable. We camp halfway under a clear sky, and warm ourselves to our neighbours’ campfire, chilly nights ahead. The 2nd day of the Timber Trail turns out to be a record in altitude meters. At the end of the trail we take a shortcut to the next campsite. Shortcut it is, but the steep uphills keep on coming. Ouch! But hey, we are tough cookies and the weather is good. And maybe we do seem a bit hungry because at the campsite we get pasta leftovers from one neighbour as appetizer, and marshmellow-chocolate-cookies from the other. In between we have good old freeze dried adventure food 🙂 Yum!

Another trail awaits us, the Great Lake Trail, at Lake Taupo. And this trail we ride for once in the recommended direction. In Kinloch we meet the man with the hammer and call it a day, and end up in a luxurious cabin offered by people we meet on the street. Lucky us. Finally also a shower after three days of sweating on the bike.

Two more days it takes us to ride to Rotorua, mostly on sealed roads, good for recovery of the legs. Even the last trail, Te Ara Ahi (thermal by bike), is mostly sealed road as we don’t bother for the single track parts this time. You know when you get closer to Rotorua when the smell is getting to you. Time for some time off the bike. Fortunately we are staying at Lou’s place, a former colleague of Ivar. And it is of course nice catching up with her. 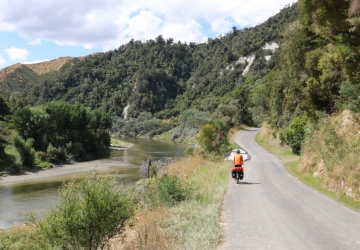 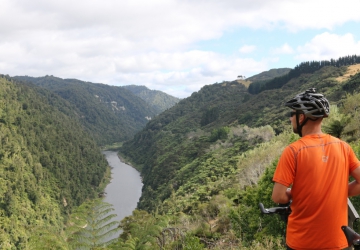 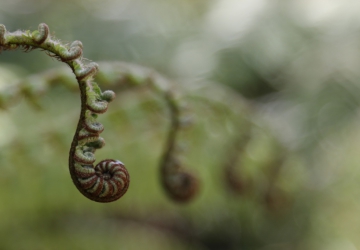 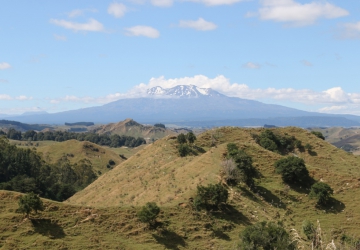 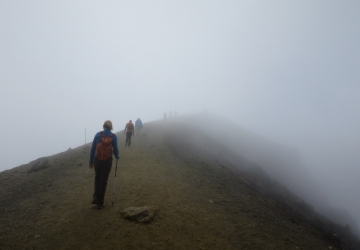 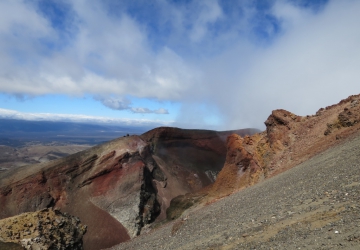 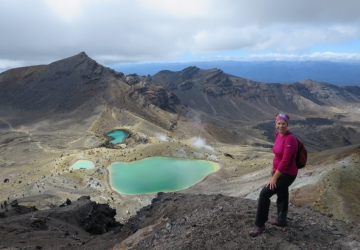 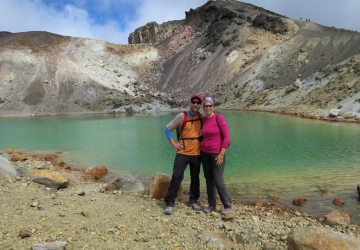 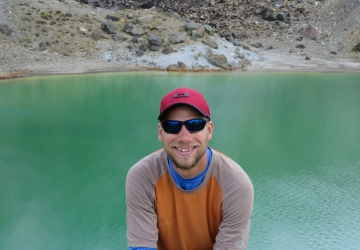 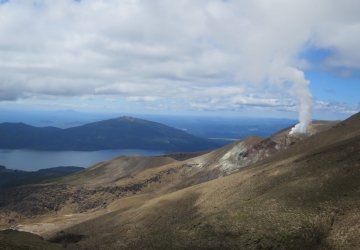 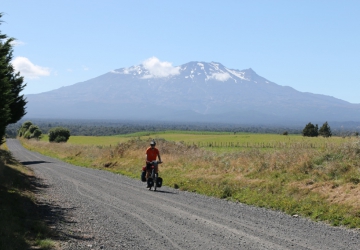 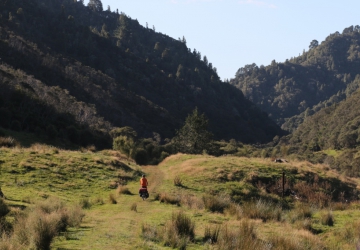 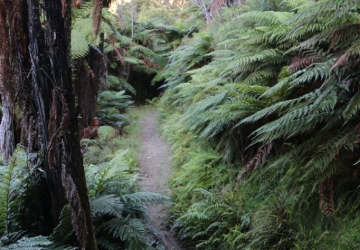 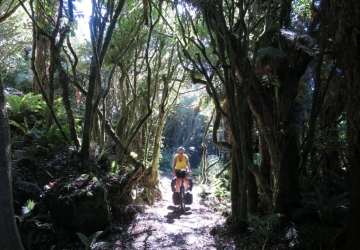 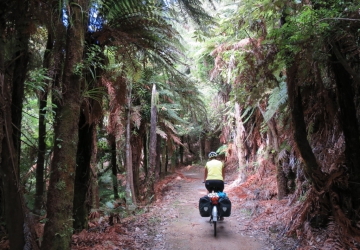 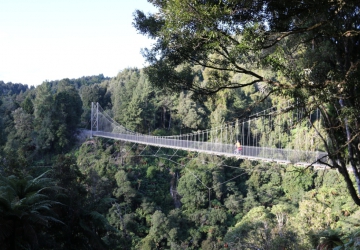 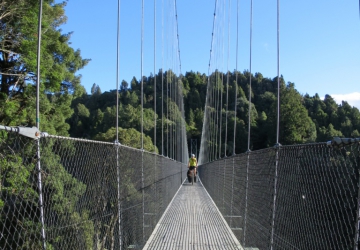 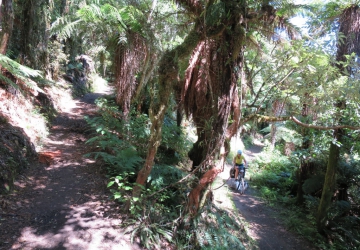 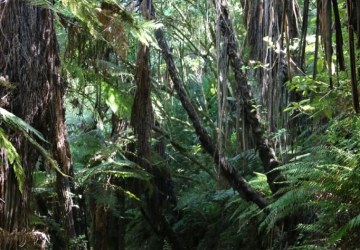 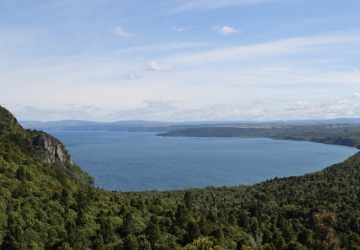 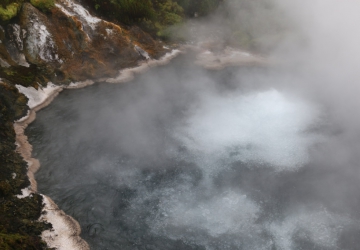 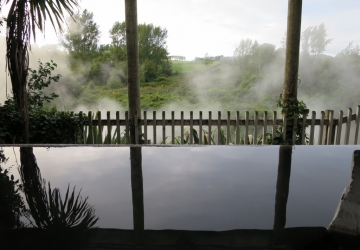 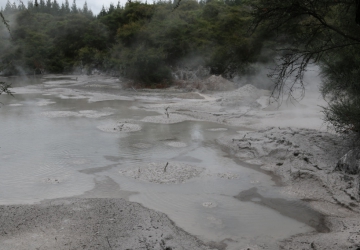 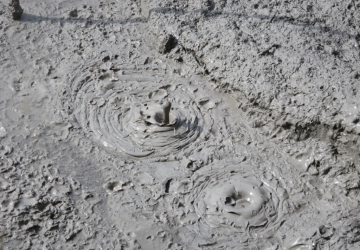 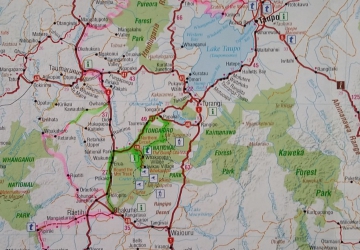 Cruisin’ till the end