After cycling from Christchurch to Lake Pukaki and the Alps 2 Ocean trail for a total of 10 days we wanted a break. Our plan was to stay at the campsite at the harbour in Oamaru for 2 nights (very small site), however it was full… We had to divert to a big and loud holiday park unfortunately, but luckily moved the second night to the nice small harbor campsite, where penguins walk into the campground.

We used our rest day to update the previous blogposts, and in the evening we saw the Blue Penguins, the smallest of all penguins. They are so cute! We waited for a long time in the rain to see them, but straight after dusk they came, crossing the road to reach their nests and feed their chicks. Upon arrival they make loads of loud noises to let their chicks know they’re there. Also at the campsite they apparently have a nest under the kitchen. At dawn they go back to sea again making noise. Anneke woke Ivar up to say that the penguins were returning to sea but all Ivar could say was: leave me alone.

Oamaru is a lovely place with an old historic centre, where a big happening was taking place with loads of old cars and even penny farthing. Together with the Steam Punk headquarters, it was a great town place to spend our resting day.

Going from Oamaru to Dunedin we tried to avoid Highway 1 as much as possible as it is a busy road and not always with a good shoulder to ride on.
From the campsite in Hampden we walked on the beach to the Moeraki boulders, big round balls shaped over a million of years. Such a sight! At the same campground we met Sebastian, a German guy who gave us a ride to the lighthouse to be there at 5 pm. Upon arrival loads of yellow eyed penguins were climbing their way up the shores to reach their nests. They are a little bigger than their blue eyed cousins, but just as cute. We admire their courage to walk up the sometimes high shores to get to their nests. The chicks were very fluffy and already quite big.

Unfortunately the next two days going to Dunedin were rainy, but luckily we were invited to stay at the home of Pam and Mike, two Kiwi’s who we met on the Alps 2 Ocean trail. Descending from Mt Cargill into Dunedin in heavy wind and rain we noticed it was only 8 degrees! We stopped and tried to get dry in a pub to wait until Pam and Mike would be home from work. On the map it looked as if it was just a 15 min bikeride to their house. A bit of overestimation here as their house was on the upper side of town and we walked almost 4 km uphill to their house, because it was just too steep and still rainy. Dunedin’s steets are really crazy, so steep! Hence, the steepest street in the world can be found in Dunedin. But no better ending to this day than a shower, a superb meal with veggies from own garden and an actual bed.

We stayed for 2 days in Dunedin. The first day Pam was our lovely guide showing us (by car) some of the nice places of Dunedin with Tunnel beach (a father dug a tunnel through the rocks for his children to go to the beach) and various places on the peninsula, which is attached to Dunedin. Unfortunately it was not windy enough to see the albatrosses fly. The endpoint of the Peninsula is the only place on ‘main land’ anywhere in the world where these birds nest. The huge birds were just sitting on their nests as it is nesting season now. Even the young ones are so large! But we did not see any of this. 🙁
We went to some of the beaches where we saw sea lions sleeping on the sand. Very cute. The 2nd day we went to see some of the amazing street art and had lunch with Joukje, a dutch cyclist who already lives in Dunedin for 2 years. One of the things on her list what to do in Dunedin was to drink an Emerson’s beer which we did later that day with Pam & Mike while enjoying the sun. Our stay in Dunedin was so nice and we really felt spoiled by our hosts. Thanks so much again! 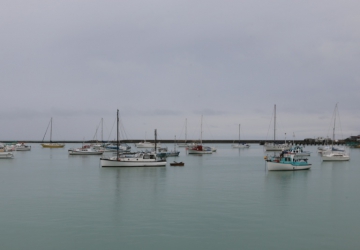 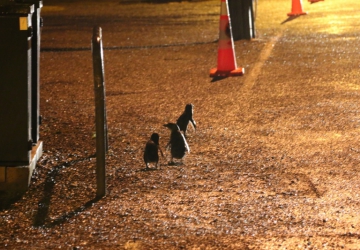 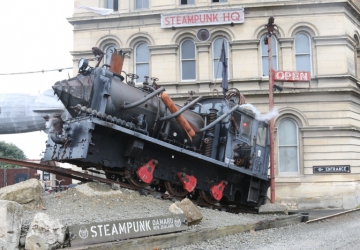 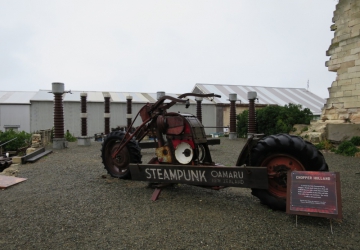 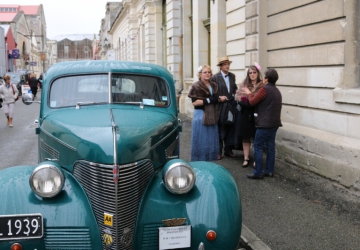 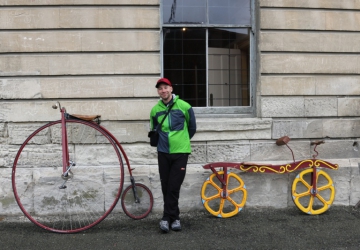 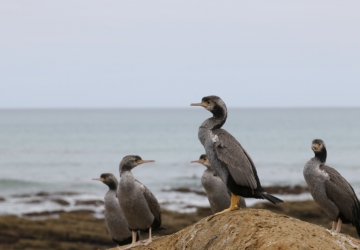 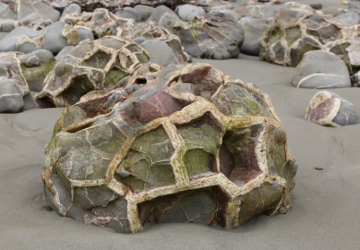 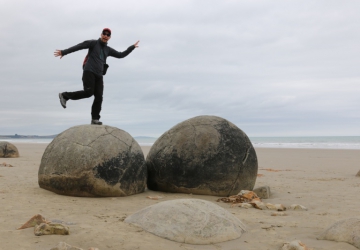 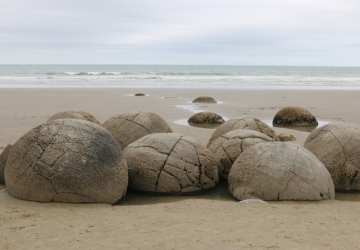 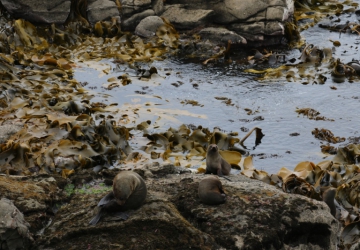 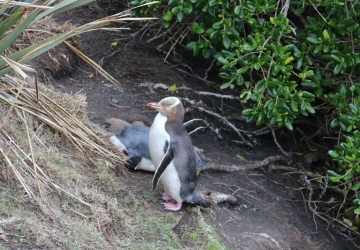 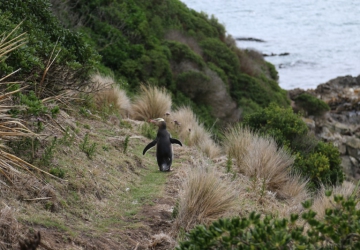 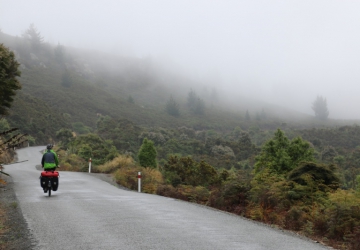 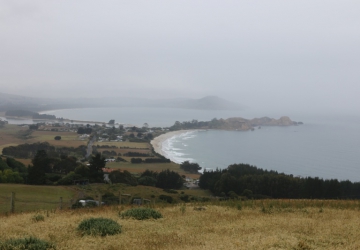 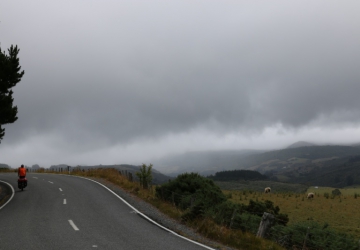 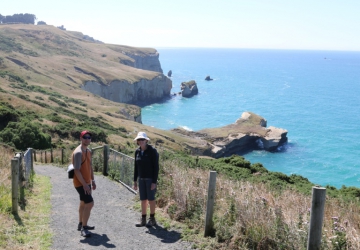 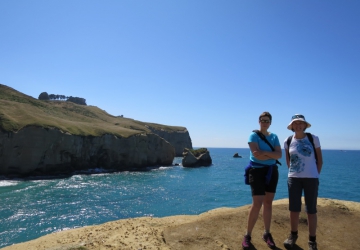 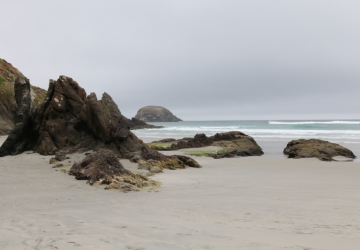 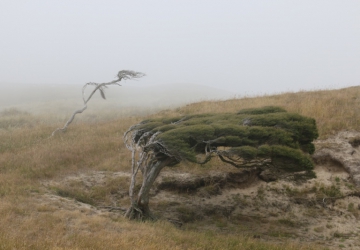 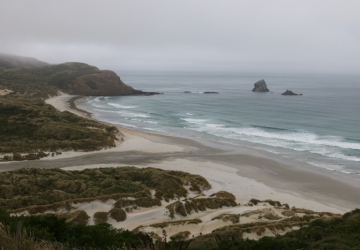 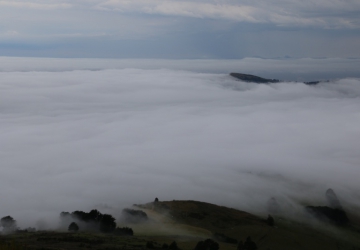 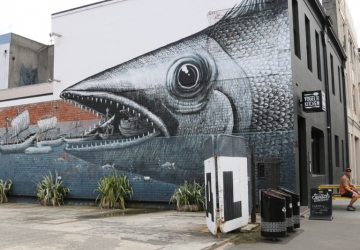 The good weather, the bad weather and the beautiful south